Edgar and Naomi had gone to bed.  It was cold, but unlike many of their neighbors in Cold Lake, Tennessee they had a good heating system and a tight warm house.  They had just settled down to watch television hoping to lull each of them into the nightscape when the sirens started.

They lived right on the main highway and daily emergency vehicles passed their house with sirens wailing.  Every time they passed Naomi would stop and pray for the responders and for whomever they were responding to.  Her friend, Thelma, had taught her that while she lived in Kentucky.

One day during an Extension meeting when Thelma was speaking she stopped dead still in the middle of a sentence and bowed her head.  When she looked up she told the group that she lived in the flight path of the medical helicopter taking the most serious cases from their hospital to the regional hospital and every time the helicopter passed over her house she would stop and pray for the safety of the workers and for the person being transported.  Naomi vowed then and there to pray every time an emergency vehicle passed.  She was still doing it all these years later.

Naomi could generally tell how serious the situation was by the speed of the emergency vehicle and the number of vehicles.  Tonight the vehicles were flying and soon followed by more.  After seven vehicles went up two came speeding back down the roadway from the opposite direction.

She couldn’t keep herself from speculating about what was going on.  At first she thought it was a bad wreck on their road known to motorcyclists as the road with five-hundred curves.  Later she guessed a house fire as the responders kept coming.  She wondered where they found so many to come to their remote region near the pointy finger part of Tennessee.

When she lost count at twenty-five she knew that the situation was serious.  Maybe a murder.  Edgar even got up and went out on the porch to look.  When he came back in he said, “It looks like a high-speed nighttime parade.”

The next morning it made the news.  There stood her friend, Sheriff Matt Stephens, with whom she had solved the murder mystery that became known as “The Body in Cold Rock Creek.”  Stephens was recounting the events of the previous night.

Later, when Naomi called him he told her the story in greater detail.  He said that he had gone up Cold Rock Creek to see Deputy John Hill who had been sick.  “I was closest when the call came in.  The dispatcher said that a neighbor called reporting a man walking around his yard with a rifle cursing to high heaven.  It was on Springs Road.  When I rolled up there was nobody outside.  About that time Deputy Rogers got there with a new officer Missy Parker.  They stopped in the middle of the road and exited their vehicle.”

The sheriff continued, “Rogers said that he yelled to Parker, as she got out of the patrol car to get down.  Just then she turned and apparently opened her mouth to speak.  A shot rang out.  No warning just a shot.  Parker slumped to the ground.  Both Rogers and I ran to her and pulled her behind the car.
“I called for an ambulance which, as it turns out, was already on route.  The call went out, ‘Officer down.’  We were able to get Parker down the road to the ambulance and they escorted her to the airport where she was air-lifted to the regional hospital.  I don’t mind telling you, Naomi, I was scared.  We didn’t know how bad Parker was hurt.  It crossed my mind how young she was and just hired two weeks ago straight out of the academy.”

Stephens obviously sniffled and he cleared his throat before continuing.  “By that time the perp was shooting nonstop and had obviously changed weapons to an assault rifle.  We were pinned down, but some officers who got to the scene were able to get the neighbors out of their house to safety.  Every officer around, regardless of who they worked for sped to the scene.

“The shooting finally stopped.  We had not returned fire, because we couldn’t see anything to shoot at and we were unsure who else was in the mobile home where the perp had retreated.   By the time SWAT went in he was gone.  The back door was open.  At daylight we apprehended him hiding in a ditch.  He gave up peacefully.  “I understand Parker will be all right,” he said.  We hung up.

About a week later, Naomi went up to mountain to visit her friend Jen Barrows and they began talking about the incident.  “You know I go to church with Missy Parker,” Jen said.  “Knowed her all her life.  Sweet girl, pretty girl.  She has a big mouth.  Now, mind you, Naomi, I don’t mean she runs her mouth all the time.  I mean she has a large mouth and it was open when the shot rang out.  The bullet went through one cheek and because her mouth was wide open, and she had not spoken yet it went right through the one cheek and out the other missing her tongue and all of her teeth.”

“Yes, it was a miracle her mother told me.  As luck would have it when Missy got to the medical center there was a plastic surgeon who had admitted a patient who had a reaction to a medication she had been given when she was having her eyelids done in his office.  You know they have what are called ‘hospitalists’ now and a person’s real doctor isn’t supposed to come to the hospital, but this guy came anyway as a visitor to see his patient.”

Jen went on with her story, “Well, they were so overwhelmed with what to do when they saw Missy’s injuries that when this plastic surgeon was walking out through the emergency room  one of the doctors recognized him and asked him to come and look and tell them what to do.  Missy was conscious.  He looked at her and said, ‘Sweetie, this is your lucky day.  I can fix this.’

“Her mother said that the doctor said that she nodded.  Somehow,” Jen went on, “the hospital gave this doctor permission to operate so he did.

“Missy’s mother was in her room after the surgery and she said that the doctor told Missy that after all the swelling was down and the stitches were out that she was going to be even prettier than she was before she was shot. ‘Because,’ he said, ‘I gave you two of the deepest most beautiful dimples that ever was on any woman.’

“And, do you know what, Naomi?  That girl is a picture.  She was pretty before, but she could be a beauty queen now.”

The local paper did a feature article on Missy Parker with before and after pictures and by golly, Jen was right.  The young woman was a beauty.  The reporter asked Missy if she minded her new nickname Dimples.  “No,” Missy replied, “but my nickname for myself is Lucky Dimples.”

The reporter asked Deputy Parker if she was going to stay in law enforcement and if she was scared when she rolled up on a call?

“Yes,” Missy told her, “I am going to stay in law enforcement.”  She continued, “I am scared when I come onto the scene, but all cops are, or should be, but that is where your training takes over and why you are more alert.  Now, however, I steel myself and tell myself … Perp, you better watch out, because Lucky Dimples is here and you have me to deal with now.”  Then she smiled her deep dimples showing.

Posted by patty cooper at 11:28 AM No comments: 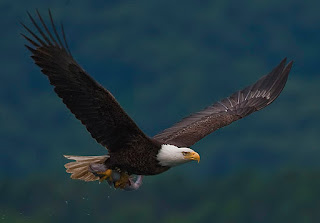 On the way home from the grocery store, at the stop light by the small airport down the road from the house I thought that I had lost my mind.  Again.  I saw what I thought was an eagle in flight.
I told Ed about it, but I thought I must have been mistaken.  Sure, we live in the midst of a national forest in a land so wild that the song birds don’t even know to get the seeds from the bird feeder.

There is a university camera set up watching two eagles nest about sixty miles from us, but there were no reports of an eagle or pair nearby.

Then, this morning in the newspaper were two pictures of an eagle.  One in a tree and another of one in flight near the airport on Thursday.  Someone captured the picture of the eagle I saw as it flew across and over the road right when I saw it.

How about that for a coincidence?  I actually saw an eagle soar not five miles down the road from where we live.  I hope that eagle finds a mate and decides to set up housekeeping, hopefully in our woods on our creek in a tree right next to where our blue heron lives most of the time.

Posted by patty cooper at 10:25 AM No comments: 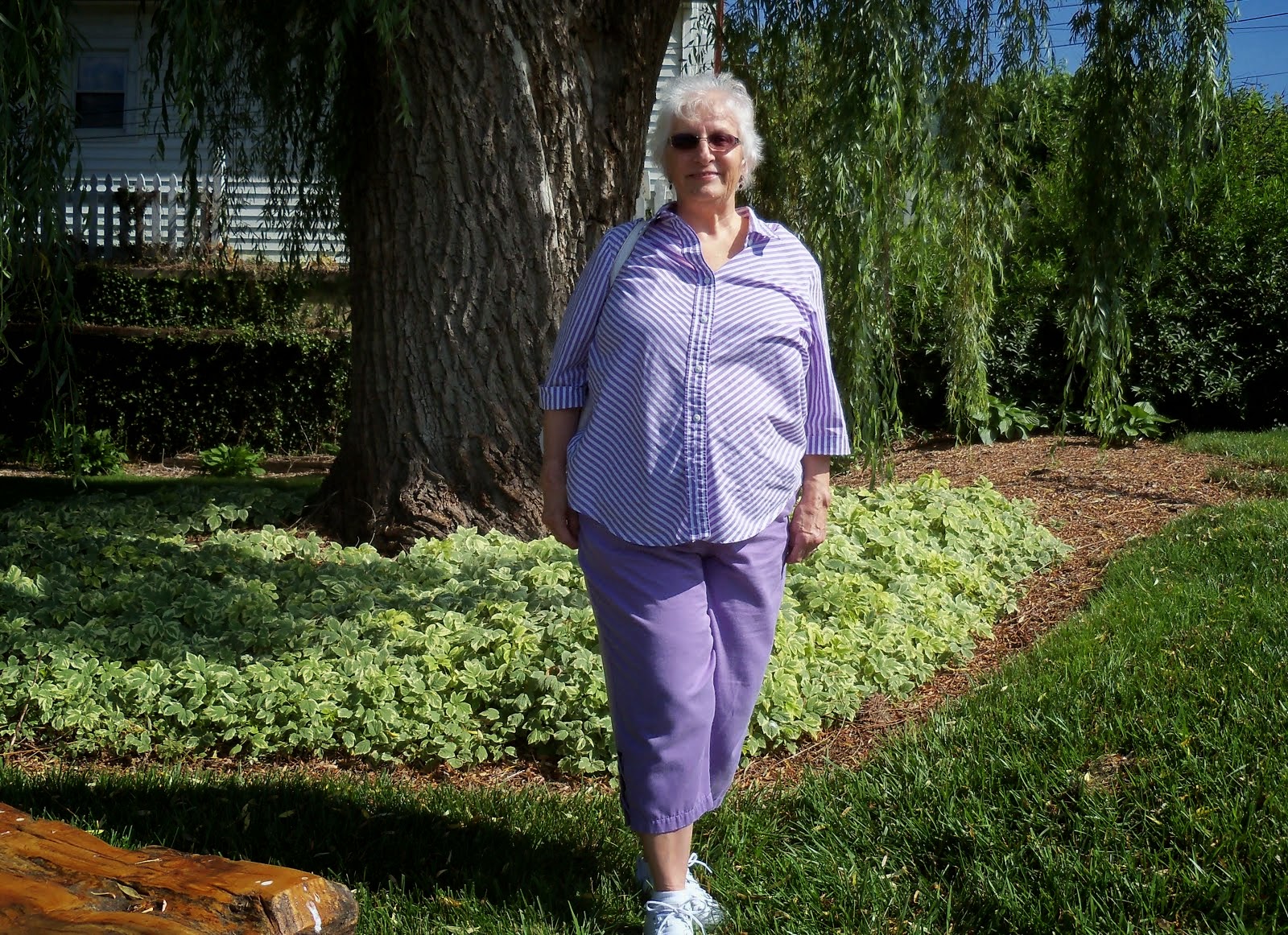